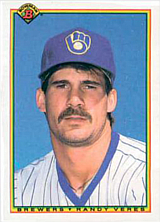 Pitcher Randy Veres was originally drafted in the 32nd round (740th overall) of the 1984 amateur draft by the New York Mets, but he opted for college. He signed after being picked in the secondary phase of the January 1985 amateur draft by the Milwaukee Brewers and scouts Earl Silverthorn and Harry Smith.

He was a consistent pitcher in the minors, with his perhaps his best season being 1987 with the Beloit Brewers: he went 10-6 that year with an ERA of 3.12.

He earned his first save on July 20, 1990 against the Seattle Mariners. The first hit he gave up was to Luis Polonia and the first home run he gave up was to Craig Worthington. He spent 5 professional seasons with teammate Doug Henry, longer than any other teammate. He compares statistically to Jeremy Fikac, according to similarity scores.

In 1995, "Florida’s Randy Veres had to go on the disabled list with an injured hand, which he hurt pounding on his hotel-room wall trying to get the people in the next room to be quiet." [1] Despite putting up the best numbers of his career in 1997 and compiling a perfect 4-0 record for the Kansas City Royals, Veres was released midseason, never to pitch professionally again.