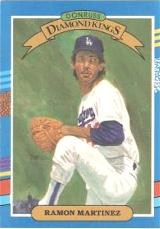 Ramon Martinez had a lifetime major league win-loss record of 135-88. He was second in the National League Cy Young Award voting in 1990 and fifth in 1995.

He is the brother of Pedro Martinez and Jesus Martinez.

Martinez pitched for the Dominican national team in the 1984 Olympics then was signed as a free agent for the Los Angeles Dodgers by scouts Eleodoro Arias and Rafael Avila on September 1, 1984. He was the youngest player in the National League when he made his debut in 1988, a year when the Dodgers won the World Series. He was with the Dodgers from 1988 to 1998, and then finished his career with the Boston Red Sox in 1999 and 2000 and the Pittsburgh Pirates in 2001. One teammate with the Red Sox was his brother Pedro, who had also been his teammate in 1992 and 1993 with the Dodgers.

While pitching for the Los Angeles Dodgers, he struck out 18 batters in a start June 4, 1990 against the Atlanta Braves. He made his only All-Star Game appearance that year.

Martinez was a roving guest instructor for the DSL Dodgers in 2010-2011. In 2012, he was a senior advisor for Latin American player development for the big league Dodgers.

Martinez won over 60% of his lifetime major league decisions. The most similar pitcher, according to the similarity scores method, is Jim Maloney, a fastballer from the 1960s. Martinez was second in the league in strikeouts in 1990, but usually wasn't among the strikeout leaders even though he had 1427 strikeouts in fewer than 1900 innings.