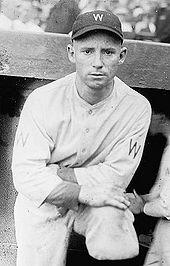 Pinky Hargrave had a ten-year career in the major leagues as a catcher. He hit .330 in 1929. He batted right-handed at first, then as a switch-hitter, and then in 1933 as a left-handed hitter.

His brother Bubbles Hargrave also played in the major leagues. They are not only one of few sets of brothers to both play major league catcher, but they likely have the most amusing set of nicknames for major league brothers: Bubbles and Pinky.

He was employed in the Fort Wayne, IN municipal light plant. He died of a heart attack while helping to convert a municipal baseball diamond to a football field.