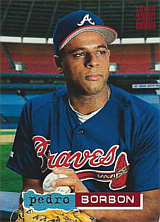 Pedro Borbón, Jr. is the son of Pedro Borbón. Both were relief pitchers with World Series rings (Pedro Sr. in 1975; Pedro Jr. in 1995) and enjoyed decade-long careers, although the father was a right-handed workhorse, while the son was a left-handed LOOGY, logging a career-high of only 53 1/3 innings (in 71 appearances with the 2001 Toronto Blue Jays) in nine major league seasons. They were the second father/son duo to record a save in the majors after the save became an official statistic; only Julio Navarro and Jaime Navarro precede the Borbóns. Charlie Leibrandt played with both Pedro Borbóns.

In 2007, Borbón was the pitching coach of the Cedar Rapids Kernels until resigning in May. He made a cameo appearance in a sketch on Saturday Night Live on December 13, 1997.