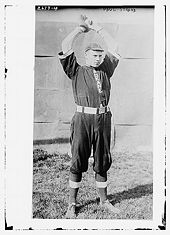 Paul Strand holds the organized baseball record for most hits in a single season for his 325 hits for the Salt Lake City Bees of the Pacific Coast League in 1923. He also won the batting title that year, hitting .394 and playing in 194 games. His performance earned him a return trip to the majors - he previously had played for the Boston Braves from 1913 to 1915, mainly as a pitcher, but he did not meet his projections, hitting only .228 in 1924 for the Philadelphia Athletics.

In 2004 he was elected to the Pacific Coast League Hall of Fame.