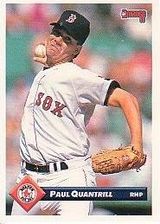 Paul Quantrill played in the Majors from 1992 until 2005 as a pitcher with Boston Red Sox, the Philadelphia Phillies, the Toronto Blue Jays, the Los Angeles Dodgers, the New York Yankees, the San Diego Padres and the Florida Marlins. With a career total of 841 games pitched, he holds the career record for Canadian pitchers.

Quantrill was first drafted in 1986 in the 26th round by the Los Angeles Dodgers, and went again in the sixth round in 1989 by the Boston Red Sox. His first appearance with the Red Sox was on July 20, 1992.

He was was the Blue Jays Pitcher of the Year in 2001 and was named to the All-Star team that year. Between 2001 and 2004 no pitcher appeared in more games than Paul.

Paul Quantrill announced his retirement on March 4, 2006 effective after the 2006 World Baseball Classic. He was inducted into the Canadian Baseball Hall of Fame and Museum on June 19, 2010. He coached for Canada in the 2010 World Junior Championship, 2013 World Baseball Classic, 2015 Pan American Games (when Canada won the Gold, becoming the second nation - after Cuba - to win two baseball Golds in the Pan American Games) and 2015 Premier 12.

In 2013 Quantrill was a consultant for the Blue Jays.

Quantrill's son Cal Quantrill was drafted by the New York Yankees in the 26th round of 2013 amateur draft and again in the 1st round (8th overall) of the 2016 amateur draft, by the San Diego Padres, reaching the major leagues in 2019.