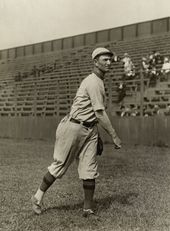 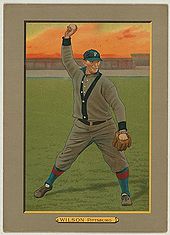 Owen Wilson holds the major league record with 36 triples in the 1912 season. Wilson is also one of relatively few major leaguers to get over 300 at-bats in every one of his major league seasons.

His record-breaking 1912 season included a stretch of six triples in five games in June, and another of five in five games in August, which includes the game of August 26th when he hit #31 and 32 to tie and break the previous record, held by Dave Orr and Heinie Reitz. Forbes Field was the top place for hitting triples (24 of his 36 triples were hit at home), and his team hit so many that they would have led the league even if Wilson hadn't hit any that year. The National League as a whole hit 685 triples that year, which is still the record.

After his baseball days he went back to Texas and was a rancher.

"Chief Wilson is the same kind of ball player for the Cards that he was for the Pirates -- a magnificent fielder and thrower, a long, but streaky hitter, but merely a mechanical performer, one who shows little life on the ball field." - Sporting Life in 1915

"Chief Wilson was the best all-around man Huggins had in the outfield last season, but the Chief's legs are brittle, and even when not out of the game he is frequently so badly crippled as to rob him of much of his efficiency." - Sporting Life of March 25, 1916