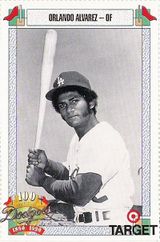 Orlando Álvarez was in the majors for four seasons, all with the Los Angeles Dodgers and the California Angels. He also played nine seasons in the minors, hitting over 100 home runs and stealing at least 74 bases.

Orlando was one of the most feared batters of the Puerto Rico Winter Baseball League during the 1970s. He played for the San Juan Senators, Bayamón Cowboys and Arecibo Wolves during his career. After his retirement as a player, Orlando continued to be active as a manager in an amateur baseball league and as a coach in the professional circuit.

He died in 2016 at age 64 from complications of diabetes in his hometown of Rio Grande, Puerto Rico.