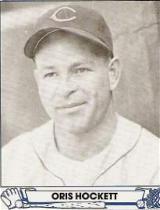 Oris Hockett had a seven-year major league career, most of which was as an outfielder during the World War II years of 1942 to 1945. He reached the majors as a 28-year-old rookie with the 1938 Brooklyn Dodgers. Although he hit .329 in 70 at-bats, he did not stick with the club. He spent most of the 1939 season in the minors with Milwaukee, hitting just .231 in only 13 at-bats with the Dodgers.

While trying to return to the big leagues, Hockett was also heating up the minors at Nashville. In 1940 with the Nashville Vols he hit .363 while playing on one of history's great minor league teams. The following year he was 2 for 6 in a brief stint with the Cleveland Indians before taking Gee Walker's spot in the outfield in 1942 (Walker had been 33 in 1942, and Hockett was only two years younger).

The next three seasons, his batting average rose each year even though his games played decreased. After the 1943 season, Hockett, with 3 children, was listed 1-A by Uncle Sam. The next year, he made the All Star team. In 1945, he moved to the Chicago White Sox and composed part of an outfield (along with Wally Moses and Johnny Dickshot) whose members were all 34 or 35 years old.