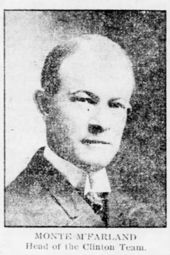 Although primarily an outfielder in the minors, he did some pitching there, going 8-3 with Cedar Rapids in 1897. In the majors he was used solely as a pitcher.

In 1908 he was appointed as an umpire in the Three I League.

This manager's article is missing a managerial chart. To make this person's article more complete, one should be added.
Retrieved from "https://www.baseball-reference.com/bpv/index.php?title=Monte_McFarland&oldid=929415"
Categories: