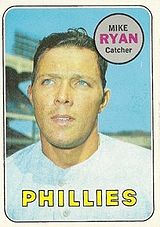 Mike Ryan was a backup catcher with the Boston Red Sox and Philadelphia Phillies in the 1960s and 1970s. He hit just .193 in his major league career, finishing up with 15 games for the Pittsburgh Pirates in 1974.

He was an outstanding defensive catcher, tied with Randy Hundley for the National League lead in assists in 1969, although Randy played in 19 more games. He was the Pirates' third catcher in 1974, something no major league team does today, playing behind Manny Sanguillen and Ed Kirkpatrick.

After his playing career ended, Ryan was a Philadelphia Phillies coach from 1980 to 1995.