Note: This page is for 1980s and 1990s pitcher Mike Cook; for the minor league pitcher with the same name, click here. 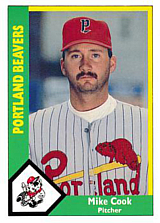 Mike Cook was a first rounder (19th overall) of the California Angels in 1985. He made his major league debut with the Angels in 1986 and spent parts of five seasons in the majors with the Angels, Minnesota Twins and Baltimore Orioles. Mike compiled a 1-6 record, 5.55 ERA and recorded 53 strikeouts with 45 walks in 41 games (71 1/3 innings).

He pitched for St. Andrew's High School in Charleston, SC and was selected in the sixth round of the 1982 amateur draft by the Philadelphia Phillies, but did not sign. He attended South Carolina for college, where he was named an All-American his junior year (1985). He was later elected into the Charleston, S.C. Baseball Hall of Fame.