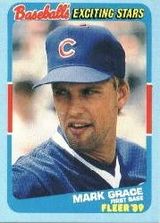 Mark Grace played sixteen years in the major leagues, posting a lifetime major league batting average of .303 and hitting 511 doubles. He also won four Gold Gloves for his defense at first base. Although he was often in the top ten in the league in batting average and on-base percentage, he was never in the top ten in MVP voting. Grace was almost never in the top ten in slugging percentage, but hit a lot of doubles, placing # 39 on the all-time doubles list (as of June 2008) and leading the National League in 1995 with 51. His highest home run total was 17 and his best RBI total was 98. Grace stole some bases early in his career, with a high of 15 steals (with 6 times caught stealing) in 1990. His biggest claim to fame, though, is that he had more hits than anyone else in the major leagues during the 1990s, yet he never had a 200-hit season.

He was drafted by the Chicago Cubs in the 24th round of the 1985 amateur draft, signing with scout Spider Jorgensen. In 1987, he led the Eastern League in RBI with 101 and slugging percentage with .545. That year, he became the second Pittsfield Cubs player in two years to win the league's MVP award.

When he was young, he used to be able to do the splits at first, thus allowing him to keep his foot on the bag while still spearing Shawon Dunston's off-target throws. He pummeled St. Louis Cardinals (and former Cub) reliever Frank DiPino after being beaned in a 1989 game. He wore #28 early in his major league career with the Cubs, but then chose to wear number 17 in honor of his boyhood baseball hero, Keith Hernandez. Indeed, the two most similar players to him through 2006, according to the similarity scores method, were Hernandez and Mickey Vernon.

Grace played thirteen of his sixteen years with the Cubs, but appeared in the World Series only with the Arizona Diamondbacks in 2001. His first postseason appearance was with the Cubs, however, in the 1985 NLCS against the San Francisco Giants. In that series, both first basemen - Grace and Will Clark of the Giants - were unstoppable at the plate: Mark went 11 for 17 with 5 extra-base hits in a losing cause, while Clark won the NLCS MVP Award by doing one better: 13 for 20 with 6 extra-base hits!

After his retirement as player, he became a broadcaster with the Arizona Diamondbacks and was rumored to be a managerial candidate before the 2005 season but was not hired. In the 2009 Hall of Fame voting, Grace received 4.1% of the vote and was therefore dropped from the ballot.

In August of 2012, he was arrested by police in Scottsdale, AZ on suspicion of DUI. He was immediately granted an indefinite leave of absence in order to seek personal assistance for his drinking problem. After the season, he was indicted on four felony counts of aggravated driving while under the influence of intoxicating liquor or drugs; in addition to the DUI, he was driving with a suspended license, and without the interlock device mandated by a previous offense. He apologized to friends and fans in early January, explaining that he did not blame the D-Backs for cutting him loose: "I did this. The Diamondbacks didn't do anything. I think it's important to own this. I own this." On January 31st, he opted to plead guilty to charges of endangerment and driving under the influence, and was given a four-month jail sentence, including a work-release program, to be followed by three years of probation; he was facing up to three years in jail as a repeat offender. He could work during the day, but had to spend nights in the Maricopa County jail, also known as "Tent City", inmates being confined to tents as there was no increase in indoor space for inmates after the county implemented some "tough on crime" policies that multiplied their number.

Grace was rehired by the Diamondbacks, this time as coach of the AZL Diamondbacks in 2013. In 2014, he moved up to the Hillsboro Hops of the Northwest League. In 2015, he was named assistant hitting coach for the D-Backs and stayed on the coaching staff until the end of the 2016 season.

He was once romantically linked to actress Janine Turner of the TV show Northern Exposure. He is and or was known for his smoking habit.