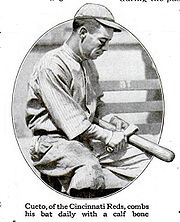 Manuel Cueto played in the major leagues and is also a member of the Cuban Baseball Hall of Fame (class of 1950). Sources are not completely in agreement as to the length of his baseball career, but it appears that he played from at least 1911 to 1939. Since he was in the U.S. minors in 1911, it seems likely he had played Cuban ball prior to 1911.

While in the major leagues, he was mostly with the Cincinnati Reds, where he was a year older than teammate Edd Roush. Cueto's best year was in 1918, when he hit .296 with a .406 on-base percentage. In the following year, 1919, the Reds won the 1919 World Series, but Cueto's last appearance with the team was in June.

Cueto was a multi-position player in the majors, playing in 82 games in the outfield, 18 at second base, 14 at shortstop, 11 at third base, and 11 at catcher.

He was called "Cuesta" in some of the box scores and newspaper articles at first in the U.S. He started with Jacksonville in 1911. After major league baseball, he played for some independent teams, and then for Seattle. Later, he was sold to Mobile where he was a teammate of Jose Acosta. He was still playing in the minors as late as 1929.

Cueto also played in other countries such as Panama and Nicaragua; in 1933, he became the first man associated with the major leagues to visit Nicaragua. Although his career seemed in general to stop around 1933, in 1939 he played in the Canal Zone League.

Sources include: Manuel Cueto and Beisboleros.