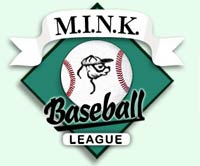 The M.I.N.K. Baseball League is a Summer Collegiate Baseball League which operates six teams throughout the midwest. Founded in 1910, The M.I.N.K. not only derives it's name from the Class D Missouri-Iowa-Nebraska-Kansas League, but is the modern evolution of the league which disolved it MLB affiliations following the 1913 season. The M.I.N.K. League continues to provide a venue for college players who wish to develop their skills to enter the Major League Baseball Amateur Draft to play baseball in an environment of increased competition. All M.I.N.K League athletes are unpaid in order to maintain their NCAA eligibility. Each team is operated in a similar manner to a professional minor league team, providing players an opportunity to play under the same conditions using wooden bats, minor league specification baseballs, experiencing overnight road trips and playing nightly before fans in a stadium.

The Clarinda A's won the 1981 National Baseball Congress World Series and the Nevada Griffons were runners up in 1997 & 1998.