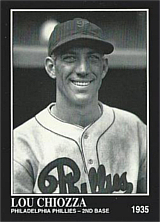 Lou Chiozza was the first major league baseball player to come to bat in a night baseball game, grounding out to Billy Myers of the Cincinnati Reds on May 24, 1935. Baseball changed dramatically that night with the introduction of Major League Baseball under the lights. President Franklin Roosevelt threw the switch from the White House six hundred miles away from Crosley Field for the historic first Major League night game. It featured the Reds against the Chiozza's Philadelphia Phillies.