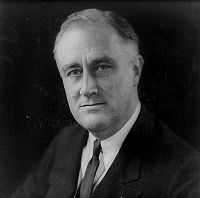 Franklin Delano Roosevelt was an American politician. He served as the 32nd President from 1933 until his death in 1945. He holds the record with eight presidential first pitches. He was also the first president to attend an All Star Game in 1937. In 1935, he pushed the button that brightened up Crosley Field for the first night game in MLB history. 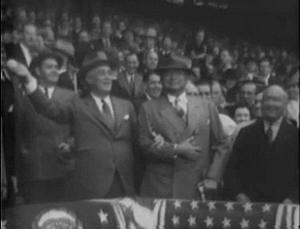 FDR throwing out the first pitch for the 1941 baseball season at Griffith Stadium.

Roosevelt's lasting baseball legacy is in writing the Green Light Letter to Commissioner Landis during the winter preceding the 1942 season. In this letter, Roosevelt gave the go ahead to continue organized baseball for the duration of World War II.