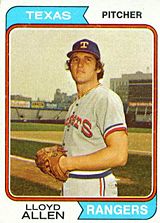 "Lloyd hasn't yet learned how to work the hitters with varied pitch selection and changing speeds. But even if he could, it wouldn't do much good because when he throws the ball Lloyd has absolutely no idea where it's going." - Whitey Herzog's blunt assessment of Lloyd's pitching, from Mike Shropshire's Seasons In Hell

One of many live, young arms trotted out by the newly minted Texas Rangers in 1973, Lloyd Allen struggled to find home plate in seven big league seasons, allowing 196 walks (to 194 strikeouts) in 297 1/3 career innings. It all came together for him just once: in 1971, he made 54 appearances (94 innings) with a 4-6, 2.49 record, 40 walks to 72 strikeouts and 15 saves for the California Angels. That year, he hit the only home run in his major league career on July 16th, against the Baltimore Orioles and Dave Boswell. The big fly turned out to be the difference in a 5-4 Angels win. Allen also recorded the save that day, pitching the last 2 2/3 innings, giving up 5 hits, an earned run, walking one, and striking out one. Lloyd played for the Santurce Crabbers of the Puerto Rico Winter Baseball League during the 1972-73 season.

When he made his major league debut for the Angels on September 1, 1969, he was the first player born in the 1950s to appear in the major leagues.