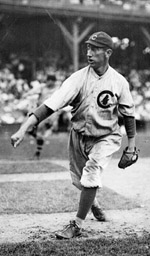 "Lew Richie's conquest of the Giants has been one of the queer turns of the battle front. . . the second he tosses his glove into a ball yard which contains the Giants, McGraw's team is a faded legion." - Sporting Life, Sept. 7, 1912

His nickname was "Lurid Lew" Richie in the newspapers, especially when he was with Chicago, although Sporting Life frequently spelled his first name "Lou". He was also known as "the Giant killer" because of his luck against that team.

"Pitcher 'Lurid Lew' Richie has advanced so much in the esteem of the Cub boss that a keeper has been provided for him. Tom Needham accompanies him nightly, ready to draw his Damascus steel kreese in case any wayfarers attempt to harm the famous pitcher. Likewise, Mr. Needham edits Lew's purchases, there being nothing doing at establishments with disappearing electric light signs". - Sporting Life, August 31, 1912