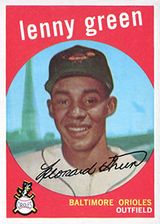 Lenny Green was a fleet-footed, lefthanded-hitting outfielder who had a twelve-year major league career. He was signed out of high school in Detroit, MI as an amateur free agent by the St. Louis Browns at the end of the 1952 season. Before he could play his first professional game, however, he spent two years of military service (1953-1954), during the Korean War. He remained stateside and managed to play a lot of baseball while completing his service, teaming up with major league players such as Willie Mays, Don Newcombe or Billy Martin. In 1955, with the Browns having become the Baltimore Orioles in the meantime, he was assigned to the San Antonio Missions for 59 games, hitting .216 in 116 at bats. He finished out that year with the Wichita Indians where he appeared in 78 games and hit .302.

Green was one of the first black players in the South Atlantic League, playing in 1956 for the Columbus Foxes, where he led the league in hitting with .318 and also in runs scored with 92. He also played in the outfield in the All-Star game. In 1957 he was hitting .311 for the Vancouver Mounties when he got a late-season call to Baltimore where he made his first appearance in the majors, getting in 19 games and picking up six base hits.

He was with the Rochester Red Wings of the International League in 1958 when the Orioles called again. He appeared in 69 contests, hitting at a .231 clip and become a full-fledged major leaguer. During a series between the Orioles and the Washington Senators series in May of 1959, Green only had to switch clubhouses when he was traded to Washington.

Green hit a career-high .294 in 1960. He homered four times on Opening Day, including three years in a row from 1961 to 1963, after the Senators had relocated to become the Minnesota Twins. He started off 1961 with a 24-game hitting streak, a franchise record until it was broken by Ken Landreaux in 1980. He was traded to the Los Angeles Angels early in 1964, then dealt back to the Orioles later that year. For the second time, he merely had to change clubhouses when the trade happened between the two clubs.

During his twelve-year major league career, he was with the Boston Red Sox in 1965 and 1966 and finished up with his hometown Detroit Tigers in 1967 and 1968 with a lifetime .267 mark. Green made four plate appearances for the 1968 World Series champions.

After baseball, Green was employed as a security supervisor for the Ford Motor Company and continued to reside in Detroit.