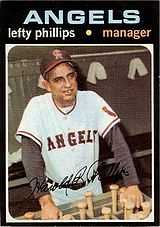 Lefty Phillips spent less than two months as a pitcher with the Bisbee Bees in 1939, before arm trouble ended his playing days. He had been a star pitcher in high school before signing with the St. Louis Browns. He became a bird dog while working for the railroad in Los Angeles, CA, then a scout for the Cincinnati Reds (1948-1950) and Brooklyn and Los Angeles Dodgers (1952-1964). With the Dodgers, he was the head scout for southern California and was credited with signing Don Drysdale and Ron Fairly, but also Bob Lillis, Sparky Anderson and Larry Sherry.

Phillips was then the Los Angeles Dodgers pitching coach from 1965 to 1968. In 1969, he joined the California Angels, and later that season was named their manager, a job he held through 1971. He died of an asthma attack less than a year later.