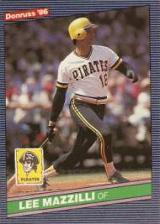 Outfielder Lee Mazzilli was drafted with the 14th overall pick in the 1973 amateur draft. He debuted in pro ball in 1974 with the Anderson Mets. On June 8, 1975 he stole 7 bases in a 7 inning game for the Visalia Mets. He reached the major leagues with the Mets late in the 1976 season and was their main centerfielder until the end of the 1981 season.

Leading off the 8th inning of the 1979 All-Star Game, Lee hit a game-tying home run for the National League. In the 9th, he walked with the bases loaded to drive in the winning run.

The Mets traded Mazzilli to the Texas Rangers in April 1982 for Ron Darling and Walt Terrell (who was later traded for Howard Johnson). Both Darling and Johnson were key members of the great Mets team of the 1980s, while Mazzilli was never again a full-time player in the majors. Lee deteriorated rapidly as a player after he was traded to the Rangers; he first developed back problems while with the Mets in 1979. In his time in Pittsburgh he was noted for having the weakest arm in the National League. Lee testified in the 1985 Pittsburgh drug trials.

After his playing career ended, Mazzilli was a coach for the New York Yankees from 2000 to 2003. After managing the Baltimore Orioles for a year and a half, he returned to the Yankees as a coach for the 2006 season.