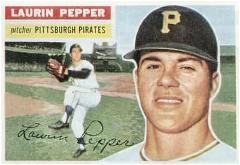 Twenty-three-year-old Laurin Pepper entered pro baseball out of Mississippi Southern College, now the University of Southern Mississippi, where he starred in football as a Helms Foundation All-American half-back who averaged over eight yards a carry in leading his team to the 1953 Sun Bowl. Pepper, the 1954 sixth round draft pick of the Pittsburgh Steelers of the National Football League was offered $15,000 to sign but they were out-bid as owner Branch Rickey of the Pittsburgh Pirates baseball club brought Pepper to Forbes Field with a $35,000 bonus offer to sign with the Pirates.

Pepper, by signing the bonus contract, was forced by the bonus rule of the time to spend two years on the big league roster before he could be farmed out. This did not prove to be good for Laurin or the Pirates. Fred Haney, manager of the Pittsburgh club that was doomed to finish dead last in 1954 with a 53-101 record, 44 games in arrears, was faced with a makeshift line-up at best and had to give Pepper some real exposure. In eight starts and six relief appearances the rookie proved painfully unready for the majors, going 1-5. In 51 innings he gave up 43 walks against 17 strikeouts, allowing 53 runs, with an ERA of 7.99.

1955 was more of the same, Pepper was still obligated to spend one more year in the majors and went 0-1, appearing in 14 games, pitching just 20 innings with a 10.35 ERA. Also the Pirates finished at the bottom again, with a 60-94 record.

Pepper played with the Pirates for just 11 games in 1956 and went 1-1 with a 3.00 ERA, spending the rest of the season with the Hollywood Stars of the Pacific Coast League where he went 2-1 with a 1.80 ERA. In the meantime, back at Forbes Field, the Pirates moved up to the seventh spot with a 66-88 record.

After baseball Pepper became the head football coach at Ocean Springs High School for 29 years until he retired in 1992. He was also the athletic director at the school from 1980 to 1992. The football stadium at the school has since been renamed "Hugh Pepper Field". Among other honors Pepper has received is being named to the University of Southern Mississippi football Hall of Fame in 1977. Pepper passed away in Ocean Springs, Mississippi in early 2018.