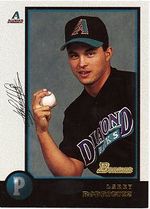 Larry Rodgriguez is a former minor league baseball pitcher who played from 1996 to 1998 in the Arizona Diamondbacks farm system.

He defected from Cuba at the same time as Vladimir Nunez.

Signed by the Diamondbacks as a free-agent in 1996, he began his professional career that very same year. A starter, he split time between the Lethbridge Black Diamonds and Visalia Oaks, going 9-6 with a 4.55 ERA. In 1997, he played for the South Bend Silver Hawks, going 4-11 with a 3.62 ERA. 1998 would end up being his final season. He played for both South Bend and the High Desert Mavericks, and he went a combined 0-4 with a 5.86 ERA in 43 innings of work.