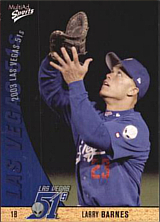 Larry Barnes was drafted by the Florida Marlins in the 1993 amateur draft (69th round, 1,643rd overall). He opted not to sign. In the 1994 amateur draft, Barnes was drafted by the Atlanta Braves in the 51st round (1,381st overall). Again, he decided it was best for him not to sign. In 1995, he was not drafted - he was finally signed as a free agent with the California Angels. Not only did Barnes - who is 6'1" and 195 pounds - have a good professional rookie season batting-wise, he also did well when it came to pitching. He hit .310 and stole 12 bases in 56 games - and also pitched in three games, won two, and had a 2.25 ERA. Even though he had success pitching in his first pro year, he found minimal success in the years following.

Perhaps Barnes' best professional season came in 1996, when he played for the Angels' Class A Cedar Rapids Kernels. He batted .317 in 131 games, with 36 doubles, 5 triples and 27 homers, scored 84 runs and drove in 112. He was the MVP of the Midwest League that year. After that season, his success simmered down but he still performed well enough to earn a promotion. On April 11, 2001, at 26 years old, he made his debut with the Angels. His first glimpse of the majors would not impress anybody - he hit .100 in 40 at bats. Perhaps one of the shining moments of his season was one of his two hits was a home run. Barnes only made one big league appearance following the 40 at-bat season with the Angels. In 2003, with the Los Angeles Dodgers, he appeared in 30 games and hit .211. He bounced all over the world thereafter, playing in Japan in 2004, and in the Marlins organization in 2005. He played his final season with Las Vegas, the Triple A offering of the Dodgers, in 2007.

One source (TSN.ca) said: "He consistently hits for power and drives in runners. His speed and base-running skills are surprising for a first baseman and he's an asset in the field. [Al]though he can get himself around the bases efficiently, he has trouble reading pitchers' moves. Too many of his at-bats result in a big, fat K. [Overall, he is] a good minor-league hitter." Barnes currently resides in Bakersfield, CA.