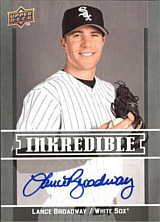 Pitcher Lance Broadway posted a 15-1 record, with 151 strikeouts in 117 innings during his last season at TCU. He won the Triple Crown of pitching in Conference USA and was named the conference's pitcher of the year. In the two seasons prior, he had been an All-Conference selection. He was selected by the Chicago White Sox in the first round of the 2005 amateur draft. The 15th overall pick and 4th pitcher selected, Broadway was signed by Keith Staab for $1,570,000. He made his pro debut that season with the Winston-Salem Warthogs, going 1-3 with a 4.58 ERA in 11 starts. Broadway spent most of the 2006 season with the Birmingham Barons, finishing 8-8 with a 2.74 ERA and fanning 111 batters in 25 games. He made one start late in the season with the Charlotte Knights, allowing 2 earned runs over 6 innings. Baseball America rated him having the best breaking pitch in the Southern League and declared him the 4th best prospect in the White Sox system. After a strong start with the Knights in 2007, Broadway struggled with consistency in July and August. The former first rounder ended the Triple A season with a record of 8-9, a 4.65 ERA, and 78 walks in 155 innings.

The White Sox promoted Broadway to the major leagues as a September call up. He debuted September 7, 2007, recording a perfect 2/3 of an inning and his first major league strikeout. On September 11th, Broadway took a loss against the Cleveland Indians for his first career decision. He made his first major league start on September 27, pitching six shutout innings against the Kansas City Royals, recording eight strikeouts, yielding just two hits and earning his first win. Lance continued to rack up accolades in Baseball America prior to 2008, as the publication ranked him the second best prospect in the organization and highlighted him having the best change-up and curveball in Chicago's system. He spent most of the year with Charlotte, going 11-7, 4.66 in 24 games. In 7 games with Chicago, all but one in relief, he was 1-0, but with a 7.07 ERA. Still, he was considered ready to pitch in the big leagues and after 3 starts with Charlotte in 2009, he was called up to Chicago in late April. He made appearances in relief for the Pale Hose, pitching 16 innings with a loss and a 5.06 ERA.

On May 30, 2009, the Sox traded Lance to New York Mets in a deal for backup catcher Ramon Castro. The Mets sent him back to Triple A, where he was in the starting rotation of the Buffalo Bisons, going 5-7, 6.27 in a very disappointing performance. He got a late season look in spite of his lack of success in the International League but he did not do much to change the negative impression as his ERA was 6.75 in 8 relief outings. He made what would turn out to be his last major league appearance on September 26th. Lance became a free agent after the season and signed with the Toronto Blue Jays for 2010. He spent another full season in Triple A, and did even worse than his uninspiring performance of the previous season. He was 3-11, 7.66 in 29 games for the Las Vegas 51s, giving up 195 hits and 75 walks in 141 innings while striking out only 89 batters. He led the 2010 PCL in both runs allowed (127), earned runs allowed (120) and walks while making the top five in hits allowed and losses. The Jays had seen enough and did not attempt to retain his services for the next year, and he was unable to find another team willing to give him another shot.

Since his playing days, Lance has entered the world of acting. His biggest role to date was playing Agent O'Neil in the 2013 film Olympus Has Fallen.