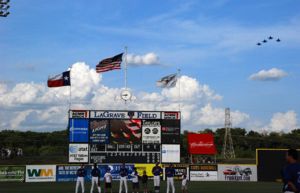 LaGrave Field was home of the Fort Worth Cats of the American Association. It was built in 2001 on the site of the original field of that name (see below) and opened in 2002. It was in use until the end of the 2014 season, but the disappearance of the Cats, who by then had switched to the United League, put its future in doubt. It was acquired by a businessman who wanted to re-develop the site for real estate, but as of 2017, it was left abandoned in increasingly derelict condition.