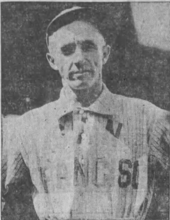 Kid Mohler holds the career minor league record for games played at second base even though he threw left-handed. His 2,871 games as a second baseman as a professional are more than anyone in baseball history, but only three of these were in the majors, with the Washington Senators in 1894. During the course of his minor league career, he hit .264 with 769 stolen bases (second all-time). Major league scouts dismissed him because of his small size and the strong prejudice against a left-handed infielder.

After his playing days ended, Mohler was head baseball coach at the United States Naval Academy in 1929-1932.