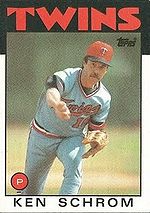 Ken Schrom played both football and baseball at the University of Idaho, and he is the most recent major leaguer to come from that university. Since his playing career ended, he has been a minor league executive, first with the El Paso Diablos and since 2003 with the Corpus Christi Hooks. Schrom has been club president for the Hooks since 2009. In 2016, he was inducted into the Texas League Hall of Fame.