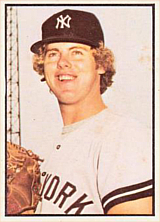 Once a top pitching prospect for the New York Yankees, Ken Clay was likened to a "morning glory" by George Steinbrenner; a horse racing term for horses that perform best in workouts instead of races. He pitched middlingly for three seasons in The Bronx, then was dealt to the Texas Rangers for Hall of Famer Gaylord Perry after the 1979 season. He made only 30 more big league appearances and was out of the bigs before 28. In 1989, he played for the Gold Coast Suns of the Senior Professional Baseball Association.

Legal troubles have plagued Ken since his playing days. He cut a deal after a 1986 arrest for four counts of grand larceny, stemming from a theft of $30,000 from Jostens Inc., the class ring company. In 1992, he was sentenced to a year in jail after stealing a car from a dealership in Virginia. While being held, it was discovered Clay withheld information about 3 other arrests from his probation officer and had three more years added to his sentence. In 1999, he received 15 years of probation on charges of grand theft and forgery (among others), skating on time behind bars after agreeing to pay all wronged parties back. Following a 2005 arrest for more forgery with regard to fictitious sales orders at a new job, he served five years in prison before being released in 2012.