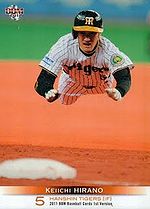 Keiichi Hirano has been an infielder in Nippon Pro Baseball.

Hirano made the Best Nine six times while in college. He was a second-round pick of the Orix BlueWave in 2001. He made it to the big club for seven games in 2002. On September 21, he legged out an infield hit off Hiroshi Takamura for his first safety in NPB. He was 5 for 22 with a walk and a steal for the year. He was with the Japanese national team for the 2002 Asian Games.

Hirano was a backup middle infielder for Orix in 2003, batting .252/.305/.348. On July 4, he took Satoru Kanemura deep for his first home run. When Jose Ortiz moved from second base to first base in 2004, Koichi Oshima initially won the starting second base job, but Hirano took over as the year progressed. He finished at .279/.340/.411 with 7 triples in 124 games. He was one triple behind Pacific League leader Munenori Kawasaki.

Orix dealt him with Kenta Abe to the Hanshin Tigers for Makoto Yoshino and Osamu Hamanaka in the off-season. They installed him as their second baseman and #2 hitter (between Norihiro Akahoshi and Takahiro Arai. He hit .263/.333/.307 with a Central League-leading 47 sacrifice hits and won Comeback Player of the Year honors.

Hirano put up a .270/.318/.332 line in 2009. He was third in the league with 28 sacrifice hits and tied for third with five triples, behind Akihiro Higashide and Soichiro Amaya. In 2010, the veteran made major strides and hit .350/.399/.421. He was second in the league in average (behind Norichika Aoki and one point ahead of #3 Matt Murton), tied for 7th with 172 hits (even with Eishin Soyogi and Alex Ramirez), tied for 5th with 5 triples, led with 59 sacrifice hits and tied Masahiko Morino for third in OBP (trailing Kazuhiro Wada and Aoki). He won the Best Nine and Gold Glove at second base.