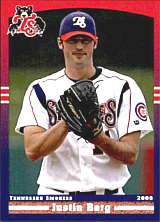 Justin Berg was drafted by the New York Yankees as a draft-and-follow selection in the 43rd round of the 2003 amateur draft. After transferring to a different junior college and playing the season, he was signed by scout Steve Lemke and made his pro debut in 2004. On August 27, 2005, he was traded by the Yankees to the Chicago Cubs for Matt Lawton. Berg made his major league debut with the Cubs in 2009. In parts of three seasons in Chicago, he posted a 4.08 ERA and a 27/27 BB/K ratio in 60 appearances (64 innings).