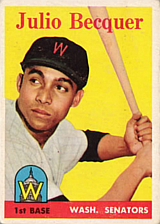 Julio Bécquer played seven seasons in the majors. He was a free swinger with a very low OBP, as evidenced by only 41 free passes in nearly 1,000 career plate appearances, but was a lethal pinch hitter, leading the American League twice in pinch hits. He also played in Cuba and Mexico.

For most of his career, Bécquer was to be a part-time first baseman for the Washington Senators, one of a host of Cuban black players recruited by Senators scout Joe Cambria. The oldest of eight children, Julio played baseball in his spare time while attending the University of Havana and working as a bookkeeper. Before the 1952 season, Julio was signed by the Senators as an amateur free agent. He began his professional career with the Class C Provincial League Drummondville Cubs, playing in 125 games and hitting at a .292 pace. Julio got to go home to play for the Havana Cubans for the 1953 season and hit .296 with 11 triples. In 1954, the Senators invited seven black Cubans, Bécquer among them, to the team's minor league spring training facility in Winter Garden, FL. Carlos Paula became the first to break the color line with the Senators that year, but Bécquer continued to hit near .300 in the minors and earned his first taste of the major league life at the end of the 1955 season.

Julio spent the 1956 season with the AAA American Association Louisville Colonels and was back with the Senators for 1957. He had 18 pinch hits that season, the eighth highest total ever, and had 23 more over the next two seasons on his way to a career total 63 pinch hits. Bécquer led the American League in this category in 1957 and 1959. But it was on July 4, 1961, that Julio got the ultimate pinch hit, a grand slam. Briefly a member of the original big league Los Angeles Angels, he made his final big league appearance pinch running for Earl Battey in 1963 with the Minnesota Twins and retired following the season.

Julio, a left-handed pull hitter with a fine glove and a .993 lifetime fielding percentage, believed he could have been a much better hitter had he played regularly, but he was just happy to play, and in a 1958 interview he offered thoughts that are almost inconceivable today: "Money is secondary with me," he said. "I love the game and I believe this is true of most major league players. In fact, many would play for nothing because they love the game so much."

He settled in Minnesota after his playing career and died the in 2020 at age 88. He worked for the Dayton's department store chain for 30 years and also served as a goodwill ambassador for the Twins, participating in hundreds of baseball clinics set up by the team. In 2016, he was honored by the team for his community service.