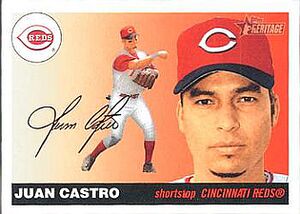 Infielder Juan Castro saw action in seventeen consecutive big league seasons, only appearing in more than 100 games three times. Not much with the bat (a .229/.266/.327 line in 1,103 games), he did much of his damage as a versatile glove man with the Cincinnati Reds, covering their entire infield from 2000 to 2004 with brief time again from 2006 to 2008. He was named infield coach of the Los Angeles Dodgers, another team he saw plenty of action with, in 2016. After the 2017 season, he joined the Toros de Tijuana in the Mexican League as Director of Operations; he had been their manager in 2015. He managed the Mexican national team to a third-place finish in the 2019 Premier 12, beating Team USA in the 3rd/4th place game for a spot in the 2020 Olympics, but was surprisingly let go prior to the Olympics themselves (Benji Gil took his place). He had gotten involved in a dispute with team officials about unpaid fees. In 2020, he returned to the majors as infield coach of the Philadelphia Phillies, staying until the end of 2021.

This manager's article is missing a managerial chart. To make this person's article more complete, one should be added.
Retrieved from "https://www.baseball-reference.com/bpv/index.php?title=Juan_Castro&oldid=1245814"
Categories: