Note: This page is for 1980s pitcher Jose DeLeon; for the pitcher with a similar name who made his debut in 2016, click here. 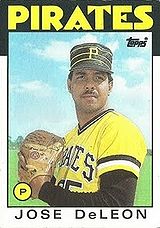 He lost the only one-hitter he threw on August 24, 1984 with the Pirates against the Cincinnati Reds. The lone hit was a single by Dave Parker but it scored Eddie Milner who had walked and advanced on an error; a second run scored on another error.

He threw a rising fastball and a forkball that dropped.

A career .091 hitter, Jose DeLeon played one game in the outfield for the Cardinals on May 14, 1988, when manager Whitey Herzog ran out of players in the 16th inning of a game against the Atlanta Braves. Herzog sent DeLeon, the previous day's starting pitcher, to left field and asked infielder Jose Oquendo to pitch. The Cardinals hung on with that makeshift line-up before losing the game in the 19th inning. DeLeon exchanged positions with right fielder Tom Brunansky 11 times during that stretch, in order to minimize the chances that a ball would be hit to the completely inexperienced pitcher-turned-outfielder. He was lifted for a pinch-hitter - another starting pitcher, John Tudor - as the Cardinals went down in the bottom of the 19th inning.