Joop Geurts made his debut in the Dutch national team in 1938 as a catcher, only 15 years of age. World War II held him from an early career as an international. He played in Hoofdklasse for Schoten Haarlem and gained with that team four Dutch championships. He was MVP of Hoofdklasse in 1957. 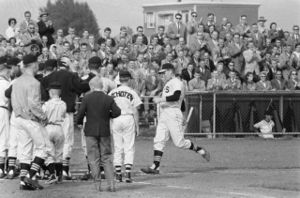 Geurts scores after a homerun from Heemskerk.

From 1956 and 1960 he won four European Championships with the the Dutch National Team. In 1956, Joop Geurts was captain of the first Dutch National Team to play in the United States. He played as an international for 23 years, until the early sixties. He played with famous pitchers as Roel de Mon, Henk Keulemans and Han Urbanus.

Geurts became also known in Dutch baseball because of the "ball-incident" in 1948 with the American ambassador Baruch. Ambassador Baruch threw the first ball of the season to Joop Geurts, who offered the ball to the Dutch Baseball League officials who were attending the game. They said that they were not interested and indicated that he could keep the ball himself. Joop Geurts asked Baruch to sign the baseball. A couple of days later the league officials changed their mind and asked for the ball. Joop Geurts now refused on the principle that they had told him that it was his ball. A scandal ensued and Geurts went to the embassy and asked Baruch to sign another ball. Geurts then showed the chairman of the Dutch Baseball League two signed balls and asked him to pick one.

Years later, Joop Geurts was called by the National Baseball Museum, whether he still had his ball. He sent his son up to the attic, who indeed found the ball. Ironically, the representatives of the Dutch Baseball League could NOT find their ball, hence there is only one ball in the museum. The big question is of course: Does the museum have the original ball or the replacement ball?