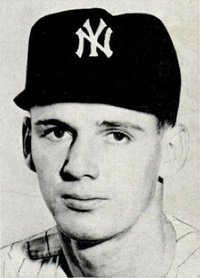 Pitcher Johnny Kucks played six seasons in the majors and appeared in the World Series in each of his first four years in the big leagues. He was an All-Star in 1956.

Kucks (pronounced "cooks") grew up in Jersey City, New Jersey. As an 18-year-old, he played semipro ball and had Johnny Podres was a teammate. Originally scouted by the Philadelphia Phillies, he eventually signed with the New York Yankees for a $18,000 bonus prior to the 1952 season. He spent that year with the Norfolk Tars, going 19-6 with a 2.55 ERA. He was second in the Piedmont League in wins and seventh in ERA while pacing circuit pitchers with 60 assists. He spent the next two summers serving in the military, spending time stationed in Germany.

Returning to baseball in 1955, Kucks returned went straight to "The Show" with the Yankees. As a rookie, he split time between the rotation and the bullpen, going 8-7 with a 3.41 ERA in 29 outings, and made two relief appearances in the 1955 World Series against the Brooklyn Dodgers. Pitching primarily as a starter the following season, he went 18-9 with a 3.85 ERA and was named to the American League All-Star squad. His team again reached the World Series, and he started Game 7, pitching a three-hit shutout over Brooklyn that gave his club the championship. He also became the last pitcher to face Hall of Famer Jackie Robinson, as that was the final game of his career. 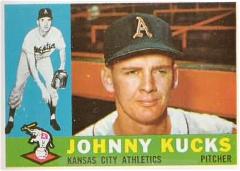 "Actually, I didn't know I was going to start that game until about an hour before, when I found the ball in my glove in my locker. It was going to be either me, Whitey Ford or Tom Sturdivant, and I think the reason Casey (Stengel) picked me was because Ebbets Field was such a small ballpark and I had that good sinkerball." - Kucks, on starting Game 7

Kucks spent two more full summers with New York, posting records near .500 while pitching as both a starter and a reliever. He made relief appearances in the World Series again in both 1957 and 1958, with his club losing the former and winning the latter, facing the Milwaukee Braves both years. After starting 1959 with a 8.64 ERA in 9 outings for the Yanks, he was traded to the Kansas City Athletics as part of a five-player deal that brought Ralph Terry and Hector Lopez to the Big Apple.

After pitching two years with Kansas City, Kucks was back in the minors in 1961, playing for the Rochester Red Wings in the Baltimore Orioles chain. Following that season, he was dealt to the St. Louis Cardinals for Ron Kabbes. He played two seasons in their organization with the Atlanta Crackers, winning 14 games in each year to lead the team. However, he called it a career following the 1963 campaign.

Kucks was the subject of an article in the August 1956 Baseball Digest. Entitled "The Smiling Stopper", referred to Johnny as pleasant and often smiling.

Following his baseball career, Kucks was a Wall Street stockbroker and lived in Hillsdale, New Jersey. He died of cancer at age 80.