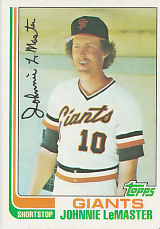 He was so skillful as a baseball player that the Giants' faithful nicknamed him "Johnny Disaster." In his last season as a Giant, in 1985, he wore a uniform with the name "Boo" on the back, in an attempt to amuse the boo birds in the stadium. In 1985, he played for 75% (San Francisco, the Cleveland Indians, and Pittsburgh) of the last-place teams in baseball. The three teams combined to finish 127 games under .500.

In 1989, LeMaster played for the Fort Myers Sun Sox of the Senior Professional Baseball Association. He batted .267 in 8 games.

Johnny played for the Caguas Creoles in the Puerto Rico Winter Baseball League. He had one of the most powerful and accurate throwing arms of the shortstops of his era

LeMaster is the winningest coach in Pikeville College history.