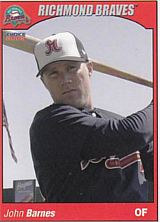 Outfielder John Barnes hit over .300 in his minor league career and earned two cups of coffee in the majors before being converted to a knuckleball pitcher in the minors.

Barnes was drafted by the Boston Red Sox in the fourth round of the 1996 amateur draft and made his pro debut that summer with the GCL Red Sox. In 1997, he hit .304 with 73 RBI for the Michigan Battle Cats and made the Midwest League All-Star team. The next season, he began the year with the Trenton Thunder before being traded to the Minnesota Twins organization in midseason. After spending the remainder of 1998 and all of 1999 with the New Britain Rock Cats, he had his finest season in 2000, hitting .365 with the Edmonton Trappers to capture the Pacific Coast League batting crown. He was rewarded for his fine performance with a September call-up to the majors, and he responded by hitting .351 in 11 games with the Twins. He injured his knee the following year and missed the first two months of the season. He returned to Edmonton in June and earned another brief big league promotion in August.

Following the 2001 season, Barnes was placed on waivers and picked up by the Colorado Rockies, but once again, he missed much of the season due to a knee injury. The next year, he signed with the Pittsburgh Pirates organization. With the Nashville Sounds, he hit .323, fifth best in the Pacific Coast League. In 2004, he was picked up by the Los Angeles Dodgers system and hit .348 with the Las Vegas 51s despite missing two months due to another injury. After spending 2005 in the Atlanta Braves organization, he returned to the Red Sox system in 2006. The Sox converted Barnes into a knuckleballer and he went 3-8 between four different clubs. He hung up his spikes after the 2007 season.