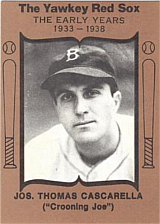 "Crooning Joe" Cascarella was blessed with a fine tenor singing voice and an adequate amount of pitching ability, going 27-48 with a 4.84 ERA while pitching 143 games with four teams in a five-season career spanning 1934 to 1938. In his rookie season, 1934, he was 12-15, 4.68 with an AL-leading 7 relief victories for the Philadelphia Athletics.

He became a popular singer on the radio and in night clubs once he hung up his spikes, later working as the operational vice president of Laurel Race Track.