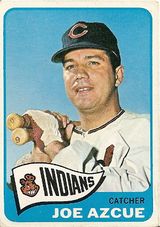 Joe Azcue, also known as José Azcue, was an American League All-Star in 1968 with the Cleveland Indians. Shortly after the All-Star Game, he hit into the first unassisted triple play since 1927 on July 30, 1968. Washington Senators shortstop Ron Hansen was the fielder, turning the last triple play in Senators history.

Azcue's career shined brightest during his seven seasons with the Tribe (1963 to 1969). He later wound up with the California Angels, sitting out the 1971 season in a contract dispute with general manager Dick Walsh. Azcue spent the year as a laborer, pouring concrete, shoveling, etc. He finished his career with 11 games with the Milwaukee Brewers in 1972.