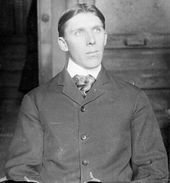 Jimmy Wiggs was born in Trondheim, Norway, in central Norway near the 64th parallel. He is one of only three major leaguers born in Norway. He pitched in the majors in 1903 and 1905-1906.

The Pittsburgh Press of June 17, 1903 stated that the Portland team wanted Wiggs "against the protest of Helena".

The same paper on April 4, 1904 said that Wiggs had been paid $1,150 in advance to try out with the Cincinnati Reds the previous spring, and he pitched only three innings before the team released him (in reality he pitched five innings in the regular season).

He was on the Detroit Tigers in 1905 when the young Ty Cobb made his major league debut. It was also the rookie year of Eddie Cicotte with the Tigers.

In 1909 Wiggs pitched for the Oakland Oaks, and appeared in the longest game in Pacific Coast League history, a 24-inning, 1-0 game. Wiggs apparently pitched the whole game, finally losing to Cack Henley.