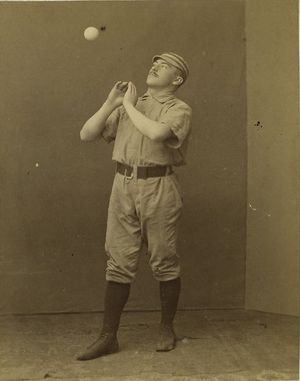 Posed "action shot" of Fogarty with the Quakers

Jim Fogarty had some notable years in the majors. He hit .293 one year when his team hit only .240. In two other years he stole 102 and 99 bases, respectively.

He was a multi-talented guy, spending most of his time in the outfield (with good range and fielding percentage) but also playing some at second, third and short as well as pitching in seven games. One year he led the league in walks and plate appearances while another year he led the league in steals. He was second in triples one year and second in hit-by-pitch another year. He also managed 16 games in 1890.

In a game in 1887, Fogarty tried the extra ball trick. Fogarty

Jim is sometimes listed as the brother of Joe Fogarty who was also in the majors in 1885. However, both were born in 1864, on different sides of the country - Jim in California, and Joe in St. Louis, MO. The confusion, which dates back to the 1890s, came from the fact that Jim did have a brother named John Patrick "Jack" Fogarty, who stayed back in California and played minor league baseball there. Somehow, he got confused with the unrelated contemporary major leaguer, whose particulars were unknown for a long time.

He died at age 27. He is rather grimly remembered in a 1907 newspaper article as follows: "Jimmy Fogarty, the idol of Philadelphia and one of the first really good men in sliding to bases, was too frail of physique to stand the strain of a severe athletic career and is in his grave, one of the few ballplayers to die of consumption." per [1]. Consumption in this case refers to tuberculosis.