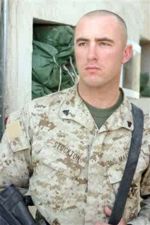 After helping the University of North Florida finish third in NCAA Division II in 2000, Jeff Stockton was picked in the 31st round of the 2000 amateur draft by the Anaheim Angels. Stockton hit .249/.314/.373 for the Butte Copper Kings that year, but struck out in 60 of 185 AB. He was Butte's primary shortstop. In 2001, he went 3 for 25 with 7 strikeouts for the Cedar Rapids Kernels and an injury forced him to retire.

Stockton put studies in criminal law aside for a while and signed his release from Major League Baseball. He then proceeded to the Marine Corps recruiting office. He served in Haiti, and later went to Iraq. He is an infantryman with the Marines.