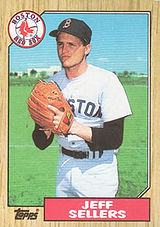 Pitcher Jeff Sellers was signed by the Boston Red Sox and scout Joe Stephenson as an 8th round pick in the 1982 amateur draft.

In 1985, with the New Britain Red Sox, he led the Eastern League with 15 complete games, 5 shutouts, and tied for the wins lead with Brad Arnsberg with 14.