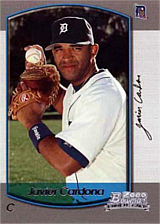 Javier Cardona played twelve professional seasons, with parts of three coming in the big leagues. In Double A in 1998, he hit .331/.387/.515 in 44 games with the Jacksonville Suns in the Southern League before being moved up to Triple A. Back again with Jacksonville in 1999, he hit .309/.384/.569 in 108 games. He got the call in 2000 with the Detroit Tigers, hitting only .235 in 72 games over the next two seasons, before finishing his big league time hitting .103 in 15 games with the San Diego Padres in 2002. In his final season, 2005, he played 51 game spread among four different minor league teams in three different organizations.