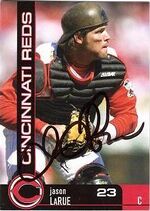 Jason LaRue was a significant contributor to the demise of the Kansas City Royals in 2007 as manager Buddy Bell insisted on rotating LaRue and his .148 batting average with the Royals' other catcher, John Buck, despite Buck's hot bat which produced the team-leading home run total. Buck hit .222 with a 90 OPS+, but it was much better than LaRue's 33 OPS+.

He was originally signed by scout Johnny Almaraz.