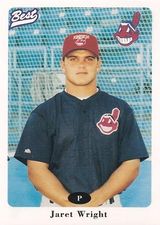 While with the Cleveland Indians, Wright threw a two-seam fastball that topped out at 98 MPH, along with a hard curveball and a changeup. After battling shoulder injuries, his fastball topped out in the low 90s.

After Wright went 2-3 with a 15.71 ERA in 2002, the Indians decided not to re-sign him and Wright became a free agent. He signed with the San Diego Padres in early 2003. He went 1-5 with an 8.73 ERA in 39 games, all in relief. He was traded to the Atlanta Braves in August. He was unscored upon in all but one of his 11 appearances with the Braves, going 1-0 with a 2.00 ERA, and was told that he was going to be made a starting pitcher again for the next season.

Wright started 2004 in the minors to build up arm strength, but was called up by the Braves when it was discovered pitcher Paul Byrd needed more time to rehab his arm (he had missed the entire 2003 season due to Tommy John surgery). Wright became the Braves' best pitcher, going 15-8 with a 3.28 ERA in 32 starts that season while amassing 159 strikeouts in 186 1/3 innings.

On December 7, 2004, Wright signed a three-year, 21 million dollar deal with the New York Yankees. That deal, signed almost simultaneously with the equally-large deal offered to Carl Pavano, was much criticized given Wright's history of inconsistency and injuries. As it turned out, the criticisms were justified: Wright was nowhere near as good with the Yankees as he had been with the Braves. He made only 13 starts in 2005, with a 5-5, 6.08 record, and missed the postseason with yet another injury. In 2006, he improved to 11-7, 4.49, making him in effect a league-average starting pitcher. He started one game in the ALDS against the Detroit Tigers, which he lost by giving up 5 hits and 3 runs in 2 2/3 innings.

On November 12, 2006, the Yankees traded Wright to the Baltimore Orioles for Chris Britton and cash. The Orioles were responsible for paying only $3 million of the $7 million left on Wright's contract.

Wright's shoulder problems returned in the 2007 and caused him to spend time on the disabled list twice; he did make three starts in April, each five innings or less, but lost all three of them and accumulated a 6.97 ERA. The Orioles reported that Wright's velocity was also down. Wright had started a rehab assignment in September and after 3 games he decided to go home ending the rest of the season. On October 1, 2007, the Orioles released him.

On January 23, 2008, Wright signed a minor league contract with the Pittsburgh Pirates, which included an invitation to spring training. At the end of spring training, he declined his assignment to the minor leagues and elected to become a free agent, effectively ending his career.