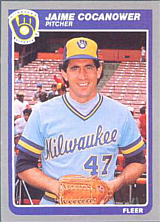 In winter ball, he played for the Santurce Crabbers in the Puerto Rico Winter Baseball League.

He grew up in the Panama Canal Zone and while he was an active player, he was listed as being born there, but his birthplace was actually San Juan, Puerto Rico.