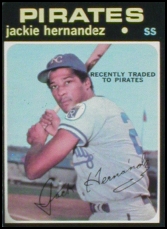 Jackie Hernandez played for several major league teams but is probably best remembered as the backup shortstop (behind Gene Alley) for the division-winning Pittsburgh Pirates in 1971 and 1972. He was also the regular shortstop for the expansion Kansas City Royals in 1969, his only year as a regular. His lifetime batting average was only .208.

In 2007, Hernandez managed the Charlotte County Redfish at the start of their inaugural season in the South Coast League, but gave the managerial reins to Cecil Fielder after only 25 games with the last-place club.